Boundaries Essential For Self-Love and Self-care 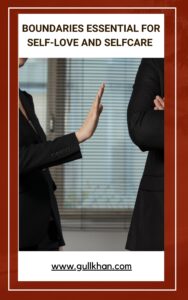 When loving yourself and also in order not to be manipulated or people wasting your time, you need to set some boundaries or lay down some rules clearly. Boundaries cause people to respect you and your time.

Ways Boundaries Works In My Life

I come from South Asian background, I was born in Manchester and grew up in London, my parents are originally from Lahore, Pakistan and they were both born in India so we are Punjabis and South Asian, we are very merry people and we are used to having lots of guests, friends and families and the concept of asking before you turn up does not exist, everyone just turns up whenever they feel like it.

When I was younger, I began to train my family and friends that they need to send a message across before showing up at my house because I am busy and I have other commitments. You pre-arrange before you show up and I know it became more common in my family and people messaged me before they showed up rather than just showing up. Subconsciously, I did this because of my commitments to work and my kids, I don’t like people calling me randomly either, my phone is on flight mode or DND so nobody’s calls can go through when I am working.

If I get a call, I will answer if it’s from a number that I recognize or I send those voicemails asking them to leave me a message and for me to get back to them and I realized that I have been doing this to my family and friends as well. They have to arrange time to speak with me and I get them to respect my time now because I respect my time, I didn’t realize I had done it so well until it was brought to my attention.

My school pickup and drop off time is between three and six. There are a couple of people like my brother and some of my cousins who would call me at that time, if it’s them I would answer, if not, I would not answer and just say, I’m sorry I can’t speak right now and give them a call much later. I am very clear in my mind that if someone calls me without arranging to see if I am free, they are not respecting my time, Of course I’m happy to speak to people but in a time that we can arrange which is convenient for the both of us. If I’m working or doing something else, cooking, there are a number of things that I could be doing, you can’t just call and expect me to answer.

There is this family member from Pakistan, they just randomly called and I actually said to them that I was busy at the moment and I wasn’t busy at the time, I was doing a mundane task but I didn’t want them to think that they can just call me anytime and I will answer, I asked if it was urgent and they said no so I said “I’m sorry, I’m busy at the moment, I’ll call when it’s more convenient” and I arranged a time with them and I called back. 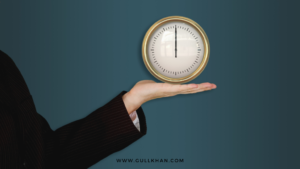 I don’t care who you are or who calls if it’s a number that I don’t recognize, I will pick it up incase it is urgent and ask if it’s urgent and when they say yes or no, depending on who is on the line, if it’s not urgent, it doesn’t matter who it is, I’ll ask them to call back later around a particular time and if they do not call me back during that time, I will not answer. I am very clear about that, if you need to you contact me otherwise, you can through email and I don’t read lengthy emails either.

I do respect my time and I want you to respect your time. It’s one of the first boundaries that you have to lay down, very clearly.

So the second boundary is about learning to say no. I remember when I first learned how to say no, it was really hard. I come from a family, like my mother who was overly generous, she had 14 siblings which she helped out financially and otherwise, every single one of them, a lot of the time. She would give things to them by taking them away from my kids, she takes the money and gives it to somebody else who needs it more. That was her idea of generosity, when I look back in time, I do believe in giving and generosity, but this is why one of the bank accounts we talk about the three steps to cash flow street is charity and charity has 10% in there for a reason. People who are overly generous, people who are empaths, and who it’s in their nature to be generous give more than they should and I think you should calculate a 10% until you do have sufficient amount of money in your bank account, until then 10% is efficient. 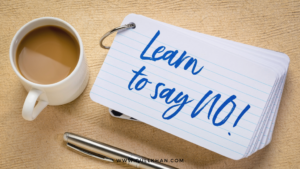 I remember one time, this uncle of mine who’s passed away now, he was a younger brother of hers and he demanded, he didn’t ask ,that she give him 5,000 pounds. This was about 30 years ago, I was about to enter into my teenage years. And I remember this clearly because he asked her for this huge amount of money which was 5,000 pounds, which was a lot of money for a woman who was working God knows how many hours at this factory and making only a hundred pounds a week. If she had the money, she would definitely send it but she didn’t have the money so she said no and he got so upset with her, how dare she say no to him when she has helped everybody else out, how she has never helped him out, he didn’t speak to her for years thereafter and I found out that even though he was not asking, he was demanding, she helped because she was so used to helping people.

He knew that she helped everyone else so how can she not help him. It doesn’t matter how she got the money, She needs to get the money and send it to him. So that kind of behavior and my mother still didn’t learn by the way, God bless her soul, she was just a very generous person. You need to set boundaries and especially if you are on this path of enlightenment and you want to be prosperous at the same time, you need to lay down boundaries, you’re not a bank. If people want money, they shouldn’t come to you, they should go to their bank and you are not a bank and you should not be bailing people out, don’t enable people, empower people, help them to help themselves. There’s an old saying that if you give a man fish, he eats for a day, you teach how to fish, he feeds for the rest of his life.

You need to help people that want to help themselves, you don’t want to be helping people who don’t want to learn how to fish. They just want you to give them the fish every single day and the day you stop giving them the fish, they get angry. There are times when you find yourself stuck between a rock and a hard place, and you can’t say no because of such a situation.

A situation where if I didn’t help, this person would be out on the streets. I am trying to lay down boundaries so that this situation can be controlled and can be taken care of as quickly as possible but at the same time, I don’t want to feel like I have been taken advantage of, it gives a really wrong energy.

My brother is just similar to my mom, God bless his soul. He is easily taken advantage of and he just feels compelled to be in this situation as things are and there was nothing else he could do. He couldn’t help this individual because it was a girl so I stepped in and I am able to help but people would take advantage of it because they think they can. I am seen as someone who’s done well and they clearly asked me if I can pay the legal fees as well and I said “No I am sorry, this is your responsibility. I am afraid I can’t do that, you have to pay the money” My brother would have nodded and found ways to justify. I’m not gonna lie, I do have the money but I have refused to pay it. 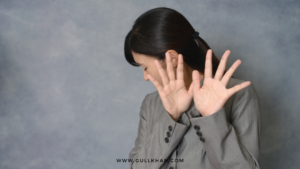 I was doing enough as it is and it was very clear and the way it was requested was similar to the tone that my uncle used on my mother a while ago where it was demanded, I wasn’t asked if I could loan it to them or if I could help them. You need to give yourself permission to say no, plain and simple, when you learn to say no, that becomes a very empowering skill that you have.

You can say no initially and have a change of heart afterwards, If you do have a change of heart, you don’t feel pressured into saying yes at that very moment, you are happy to help, they would be more elated to hear this news. If you say yes because you’re obligated to say yes but later on when you go away, you think about it and you can’t help them and you pick the phone, call up and tell them that you found out you can’t help them, they will feel bad and upset towards you. 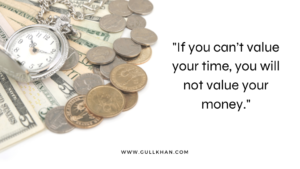 I hope we now understand how boundaries enable our self care and self love and how they go hand in hand in your journey to becoming wealthy. If you don’t love yourself enough to value your time, then you are never going to become wealthy.

If you can’t value your time, you will not value your money. It’s as simple as that. Love and respect yourself and your time and enforce other people to do the same.

This will close in 0 seconds